“As announced today, five new deals in China reflect the global appetite for our content,” said Dana Landry, CEO of DHX Media.  “We are also excited about our WildBrain Multi-platform Kids’ Network, which is performing very well with Q1 revenue up 68% over the same period last year.  While the first quarter was a slow start, we expect to deliver growth for the rest of the year in line with our recently increased annual revenue outlook on the back of continued strong global demand for our shows. The back half of the year is also expected to benefit from growing momentum for Teletubbies as we continue to roll out broadcast and consumer products for this flagship brand worldwide.”

Today, the Company declared a dividend for the quarter of $0.018 on each common voting share and variable voting share outstanding to the shareholders of record at the close of business on November 29, 2016 to be paid on December 16, 2016.

On November 8, 2016, management updated its Outlook for fiscal 2017, which reflected an increase to the total revenue target range for the year, attributable to anticipated growth for WildBrain.  Details of management’s expectations for revenues, gross margins and operating expenses for fiscal 2017 can be found in the Outlook section of the Company’s Q1 2017 MD&A, available at www.dhxmedia.com, on www.sedar.com or http://www.sec.gov/edgar.

DHX Media will hold a conference call for analysts and investors to discuss its Fiscal Q1 2017 results on Tuesday, November 15, 2016 at 8 a.m. ET.  Media are welcome to listen in. 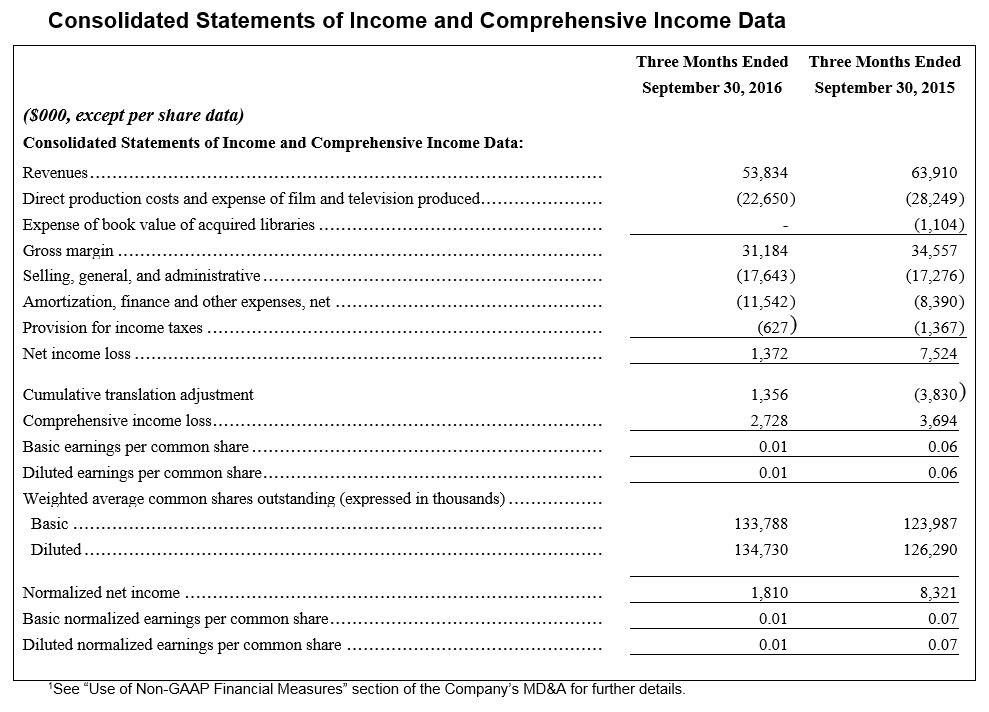 Revenues for Q1 2017 were $53.83 million, down 16% from $63.91 million for Q1 2016. In absolute dollars, the decrease in Q1 2017 was due largely to expected declines in DHX Television and consumer products-represented revenues, as well as declines in proprietary production, distribution, producer and service fees, and consumer products-owned that are attributable to a combination of expected seasonal fluctuations and the timing of certain deliverables as detailed below. Comparatively, Q1 2017 and Q1 2016 include the same assets in terms of prior acquisitions; accordingly, all revenue fluctuations in comparing Q1 2017 to Q1 2016 are organic. A detailed review of each source of revenue is included below.

Distribution and Wildbrain revenues: Total distribution revenues were up 5% to $14.68 million, from $14.03 million for Q1 2016, driven by strong growth in WildBrain. Distribution revenues excluding WildBrain were $8.78 million for Q1 2017, down $1.73 million from $10.51 million in Q1 2016. Management continues to see strong annual growth and continued strong demand from new digital customers, platforms, and territories. While distribution revenues excluding WildBrain were down compared to Q1 2016, they were in line with the Company’s revised quarterly pacing provided in its Corporate Update press release of November 8, 2016 and Management is reiterating its previously provided annual revenue target of $76-80 million. For Q1 2017, amongst other key distribution deals for both linear and digital platforms, the Company closed significant deals with ITV, Lagardère Thématiques, Netflix, and Turner. Management is very pleased to report that revenues from WildBrain were $5.90 million for Q1 2017, reflecting 68% growth versus Q1 2016 revenues of $3.52 million. Management is also pleased to report that the annual revenue target for WildBrain was increased in its Corporate Update press release of November 8, 2016.

Producer and service fee revenues: For Q1 2017, the Company earned $10.41 million of producer and service fee revenues, a decrease of 27% versus the $14.30 million from Q1 2016, which were in line with the Company’s revised quarterly pacing provided in its Corporate Update press release of November 8, 2016. Management expects progress to accelerate for the remainder of Fiscal 2017 on a number of key service projects.

Gross margin for Q1 2017 was $31.18 million, a decrease in absolute dollars of $3.38 million or 10% compared to $34.56 million for Q1 2016. The overall gross margin for Q1 2017 at 58% of revenue was near the mid-point of Management’s revised guidance as provided in its Corporate Update press release of November 8, 2016, impacted by stronger than expected revenue growth for WildBrain, seasonally low deliveries for proprietary production, and lower than expected live tour gross margins. At 42%, gross margins for producer and service fees were at the mid-point of Management’s expectations. Gross margins for DHX Television, at 62%, were well within Management’s expectations, impacted by lower external content costs when compared to Q1 2016. Gross margin for Q1 2017, including DHX Television, was calculated as revenues of $53.83 million, less direct production costs and expense of investment in film of $22.65 million and $nil expense of book value of acquired libraries, (Q1 2016-$63.91 million less $28.25 million and less $1.10 million, respectively).

SG&A costs for Q1 2017 increased 2% to $17.64 million compared to $17.28 million for Q1 2016. SG&A includes $1.29 million (Q1 2016-$1.09 million) in non-cash share-based compensation. When adjusted, cash SG&A at $16.35 million was below Management’s quarterly SG&A expectations, benefited somewhat by the weakness in the GBP versus the CAD. Management intends to continue to add resources throughout the year as it continues to ramp up its WildBrain business and to drive in the consumer products-owned business.

For Q1 2017, Adjusted EBITDA was $14.83 million, down $3.54 million or 19% over $18.37 million for Q1 2016. Please see the “Use of Non-GAAP Financial Measures” and “Reconciliation of Historical Results to Adjusted EBITDA” sections of the MD&A for the definition and calculation of Adjusted EBITDA.

DHX Media Ltd. (www.dhxmedia.com) is the world’s leading independent, pure-play children’s content company. Owner of the world’s largest independent library of children’s content, at more than 11,800 half-hours, the company is recognized globally for such brands as Teletubbies, Yo Gabba Gabba!, Caillou, In the Night Garden, Inspector Gadget, Make It Pop, Slugterra and the multiple award-winning Degrassi franchise. As a content producer and owner of intellectual property, DHX Media delivers shows that children love, licensing its content to major broadcasters and streaming services worldwide. Through its subsidiary, WildBrain, DHX Media also operates one of the largest network of children’s content on YouTube. The company’s robust consumer products program generates royalties from merchandise based on its much-loved children’s brands. Headquartered in Canada, DHX Media has offices in 15 cities globally, and is listed on the Toronto Stock Exchange (DHX.A and DHX.B) and the NASDAQ Global Select Market (DHXM).

This press release contains “forward looking statements” under applicable securities laws with respect to DHX Media including, but not limited to, statements regarding the effect of IAS 38 on revenues, the expensing of investment in film, gross margins, and quarterly pacing, the growth and performance of DHX Media’s WildBrain business and Teletubbies brand, the timing of production schedules and deliveries, the Company’s penetration in China, the markets and industries in which the Company operates, including demand from new digital customers, platforms and territories, the business strategies and operational activities of DHX and its subsidiaries, and the growth and financial and operating performance of DHX, its subsidiaries, and investments. Although the Company believes that the expectations reflected in such forward looking statements are reasonable, such statements involve risks and uncertainties and are based on information currently available to the Company. Actual results or events may differ materially from those expressed or implied by such forward looking statements. Factors that could cause actual results or events to differ materially from current expectations, among other things, include delivery and scheduling risk associated with production revenues, the Company’s ability to execute and close anticipated licensing transactions, the Company’s ability to identify, negotiate and execute on acquisition opportunities for the WildBrain business, for which no acquisitions are currently under contract, and the risk factors discussed in materials filed with applicable securities regulatory authorities from time to time including matters discussed under “Risk Factors” in the Company’s Annual Information Form and annual Management Discussion and Analysis, which also form part of the Company’s annual report on Form 40-F filed with the United States Securities and Exchange Commission. These forward-looking statements are made as of the date hereof, and the Company assumes no obligation to update or revise them to reflect new events or circumstances, except as required by law.